Weight of a Flame - Truth and Fiction 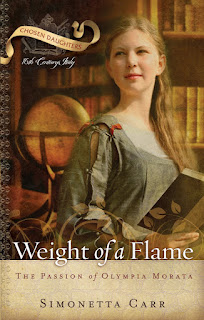 As promised, I am beginning to write a list of what is historically true and what is a fruit of my imagination in every chapter of my book, Weight of a Flame, the Passion of Olympia Morata. I will start with the first chapter. Your comments are welcome!

1. Cover - Olympia's looks on the cover are the fruit of the artist's imagination of Robert Papp. There is only one portrait available that depicts Olympia Morata. There she is much older, and we don't know for sure if it's an accurate portrait, so our artist has taken the liberty to take those basic features and come up with a younger Olympia.

2. Map - the map is quite accurate, between my knowledge of Italy and my map artist's (Tom Carroll) knowledge of Germany. Fun fact - we used mapquest for much of the route, including an approximate time of their trip (I chose "on foot" because the wagon probably traveled quite slowly). BTW, Tom Carroll did not get credit for the map, which was a sad oversight. We will remedy in the next edition. For the time being, please know that he has been very accurate and patient. It's not easy to find 16th century maps and retrace someone's steps.

3. Chapter One -
What's true - In 1539, Olympia went to live at the court of Duke Ercole and Duchess/Princess Renée of France. It's true that her parents were Fulvio Pellegrino Morato and Lucrezia Morata. The tailor's conversation about the duchess is based on reported facts. It's also true that Fulvio had to leave Ferrara for a while and had just returned. He was a teacher at the University and a tutor at the ducal court. And it's true that he wrote a book on colors and flowers (the quote is from the book) and taught Calvin's Institutes to his students on some occasions.
What's imagined - We don't know any of their personalities. We know nothing about Lucrezia. I deduced something of Fulvio's personality by his writings (letters and his treatise on colors and flowers). He seemed a little extravagant and pedantic, but in a letter to Celio Curione he manifested a great excitement for the Gospel. Did I capture who he was? Who knows? The tailor and his wife are a product of my imagination.
One note about clothes. Oddly, in Olympia's letter there is a recurrent interest in clothes. When she had to leave the ducal court, she was particularly upset that she was not allowed to take one of her dresses. In Germany, she describes a dress she received as a gift, even guessing its value. Even when she escaped the city, she took care to describe the ragged clothes she was wearing. I thought it was interesting, so clothes are mentioned here and there at key times in my book. You will find them here at the start and again at the close of the book.